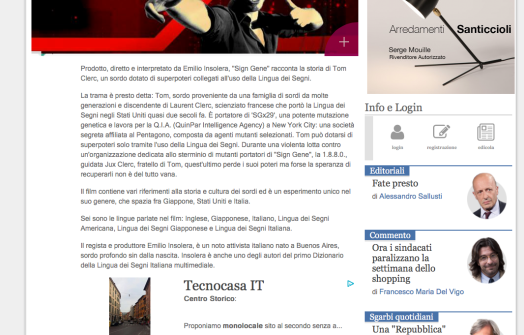 TRANSLATION FROM ITALIAN TO ENGLISH MADE POSSIBLE BY #SIGNGENE TEAM

The director and producer Emilio Insolera, is a well-known Italian activist born in Buenos Aires, profoundly deaf since birth. Insolera is also one of the authors of the first Italian Sign Language Multimedia Dictionary.

It’s called “Sign Gene” and is the first feature film that has brought a deaf superhero on the big screen.

Produced, directed and interpreted by Emilio Insolera, “Sign Gene” tells the story of Tom Clerc, a deaf with super powers connected with the use of Sign Language.

The plot is soon said: Tom, deaf coming from a deaf family from many generations and descendant of Laurent Clerc, a French scientist who brought the Sign Language to the United States almost two centuries ago. He is carrier of ‘SGx29’, a powerful genetic mutation and works for Q.I.A. (QuinPar Intelligence Agency) in New York City: a secret agency affiliated to the Pentagon, consisting of selected mutant agents. Tom can have superpowers only through the use of Sign Language. During a violent fight against an organization dedicated to the extermination of bearers of “Sign Gene”, 1.8.8.0, led by Jux Clerc, Tom’s brother, the latter loses his powers but perhaps the hope of recovering them is not all in vain.

The film contains several references to the history and culture of deaf and is an unique experiment of its kind, ranging between Japan, the United States and Italy.

The director and producer Emilio Insolera, is a well-known Italian activist born in Buenos Aires, profoundly deaf since birth. Insolera is also one of the authors of the first Italian Sign Language Multimedia Dictionary.

@signgene ‘wildly inventive as it is empowering’ @losangelestimes ‘Hard to come away from the film without feeling like you’d seen something entirely new’ @pacificstand ‘All happens very fast and astonishes you with a vibrant energy’ #asvof ‘An experimental, paychedelic and fascinating film’ @lavocediny ‘A must to watch film’ #CinecittàNews ‘Energetically blended elements of X-Men, Da Vinci Code and 007’ @thejapantimes
Classic fight scene of @signgene with stars @emilioinsolera and @hiroshivava
Thank you #Osaka for the great planning for @signgene !!! Much love to you all!
@signgene stars @emilioinsolera and @hiroshivava with their autographes! Do you want it too? Vuoi uno? 1つをしたいですか？ #deafsuperhero #deafsuperheroes #signgene #autograph
Star @emilioinsolera ⭐️
本当有難うございます！